As the sun sets in Shanghai, London is already in play and New York is just waking up.

We believe that pop culture is the world’s culture yet we live in a world of too much information and too little context. Too many headlines yet not enough big stories that connect us all.

Here at Pop News Edition, we look at pop culture from a global perspective. Our editorial teams all over the world focus on delivering a more diverse, in-depth look at today’s biggest pop culture stories. Stay informed to all things pop culture liked, shared, and made by us. You can find our work where you live on the internet — Facebook, Youtube, Instagram, and more. 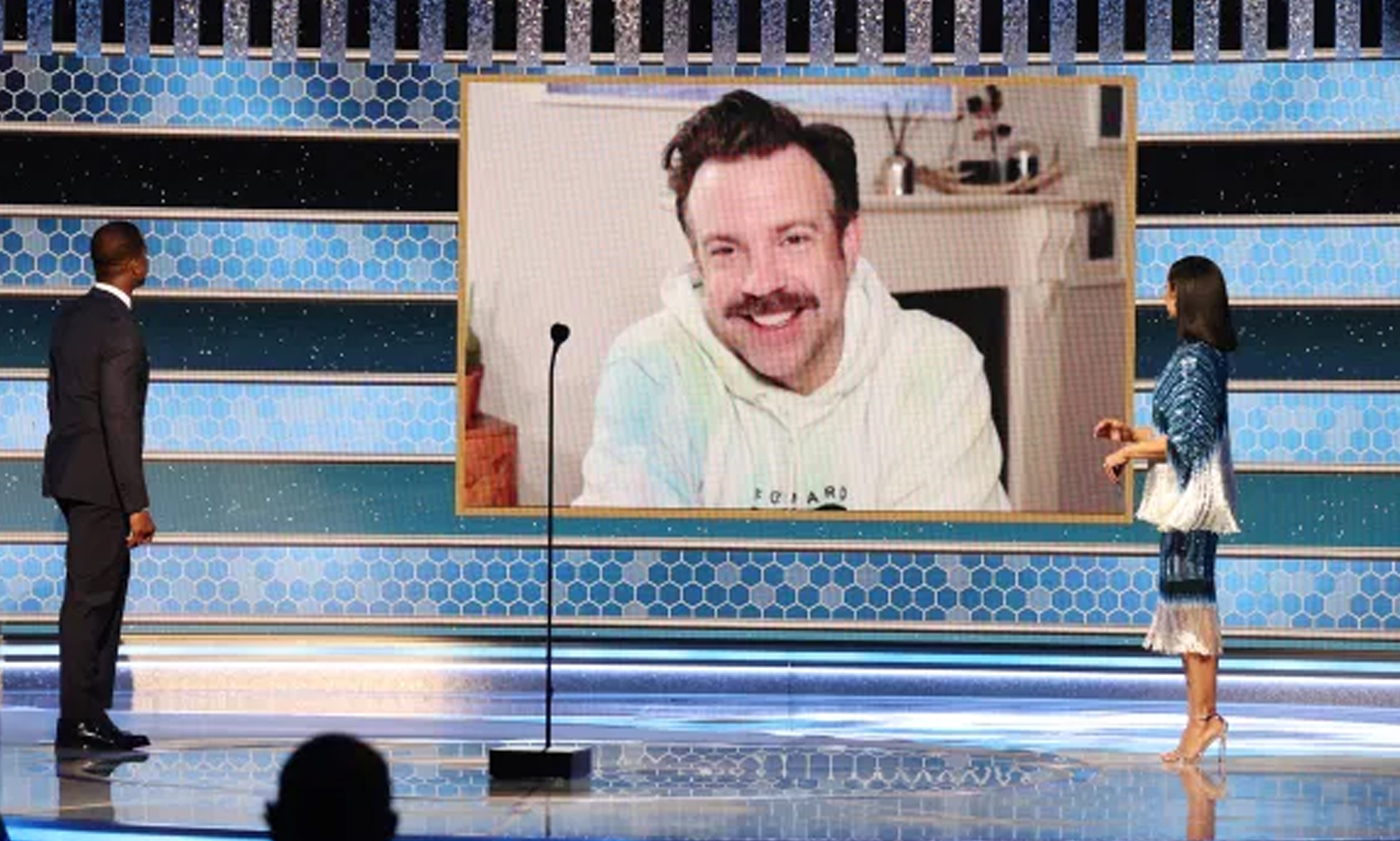 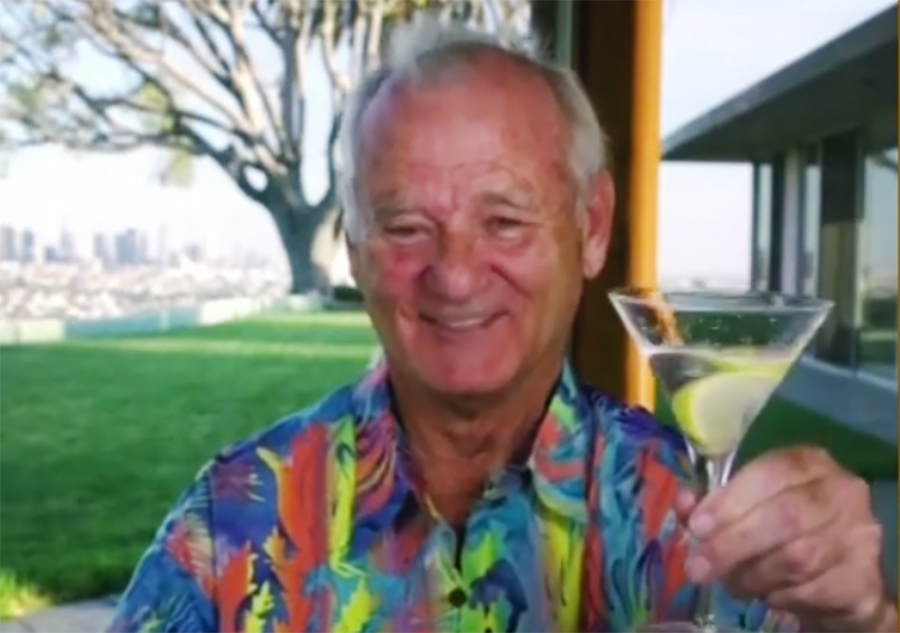 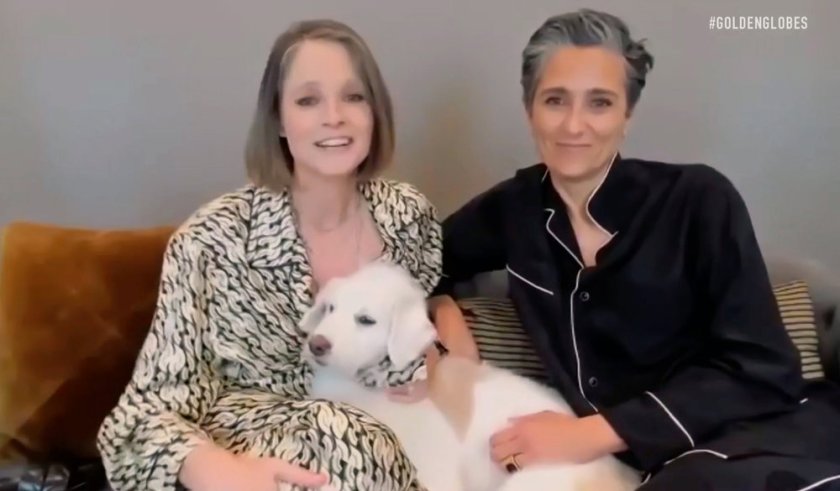 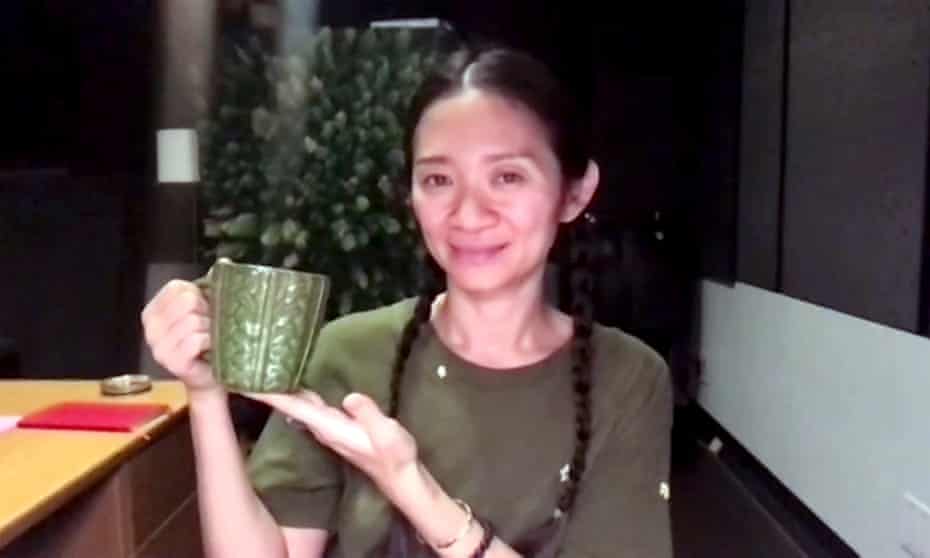 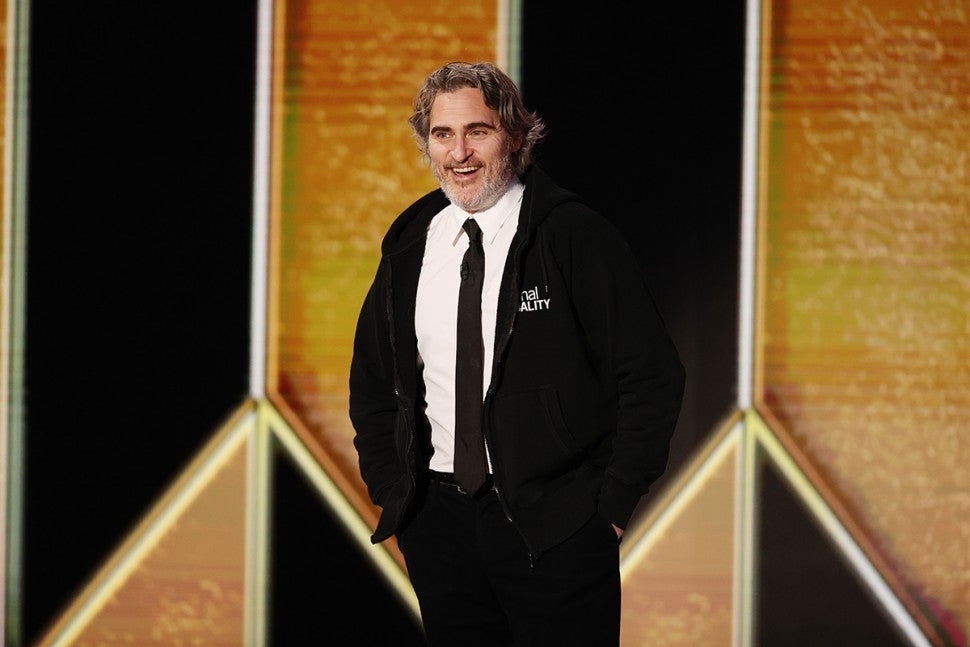 The 2021 Golden Globes did not have the usual red carpet filled with photographers, members of the press, and celebrities. This year, only a few stars posed on the socially-distanced step-and-repeat in Los Angeles and New York City while the majority made appearances from home.

But that doesn’t mean the celebrities didn’t pop-off in the comfort of their own living rooms! 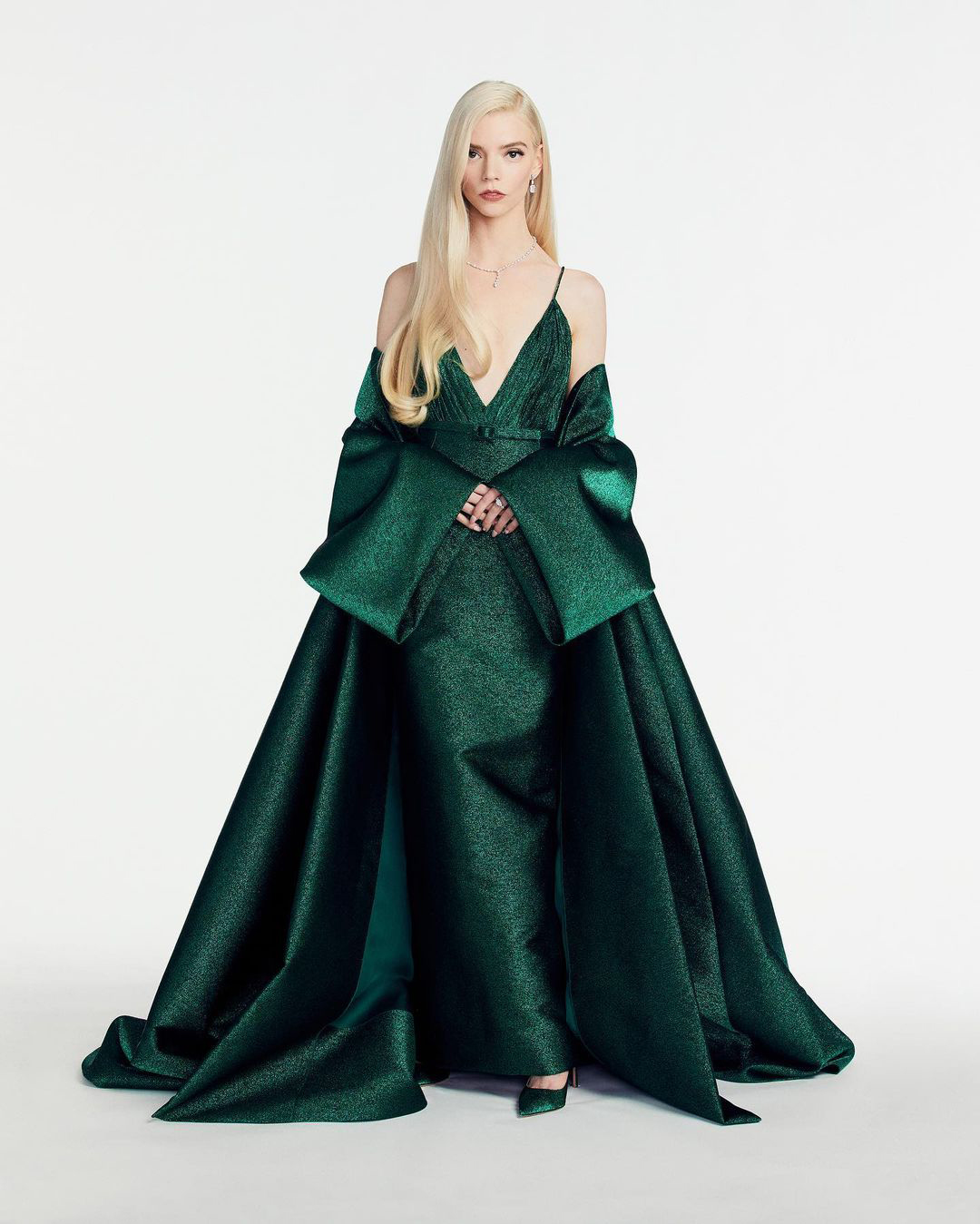 Anya Taylor-Joy stuns in a custom emerald Dior Haute Couture dress and over $1 Million in Tiffany Diamonds. Styled by Law Roach, the 24-year-old actress took home her very first Golden Globes win for Best Actress in a Limited Series for her performance in “The Queen’s Gambit”. 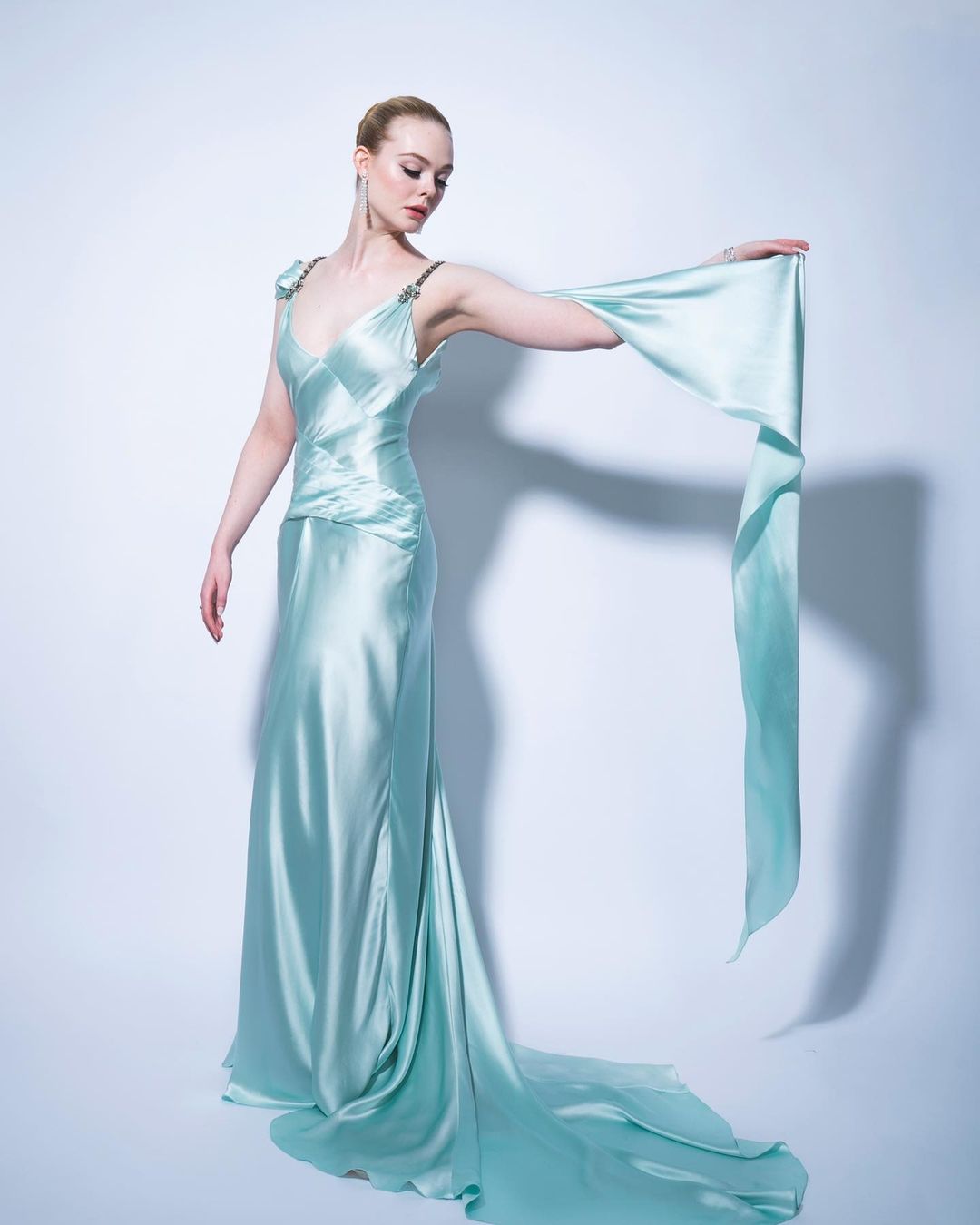 Elle Fanning debuted her gorgeous, silky pastel Gucci gown on Instagram! She wore her hair in a bun and completed her look with Fred Leighton jewels. 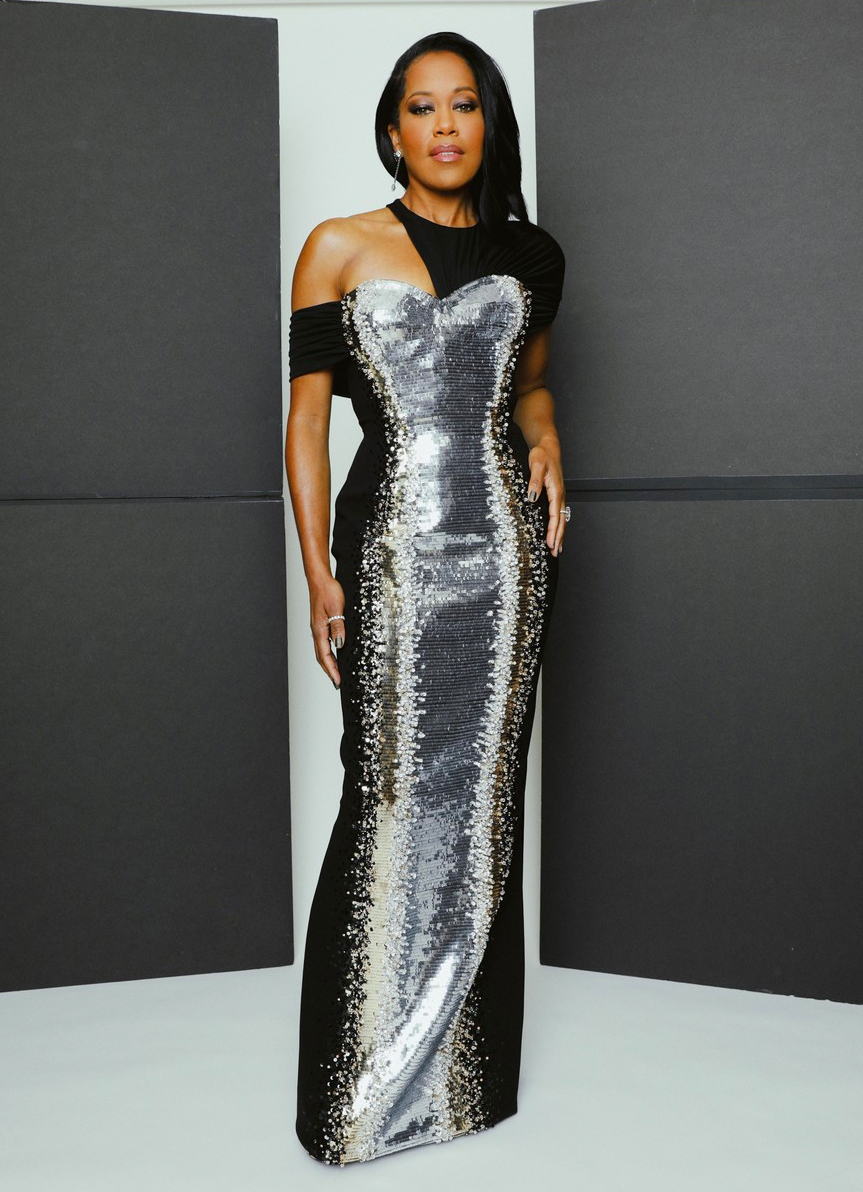 Oscar-winner Regina King, nominated for directing “One Night in Miami,” wore a black-and-metallic Louis Vuitton gown with thousands of crystals and over 350 hours of embroidery. 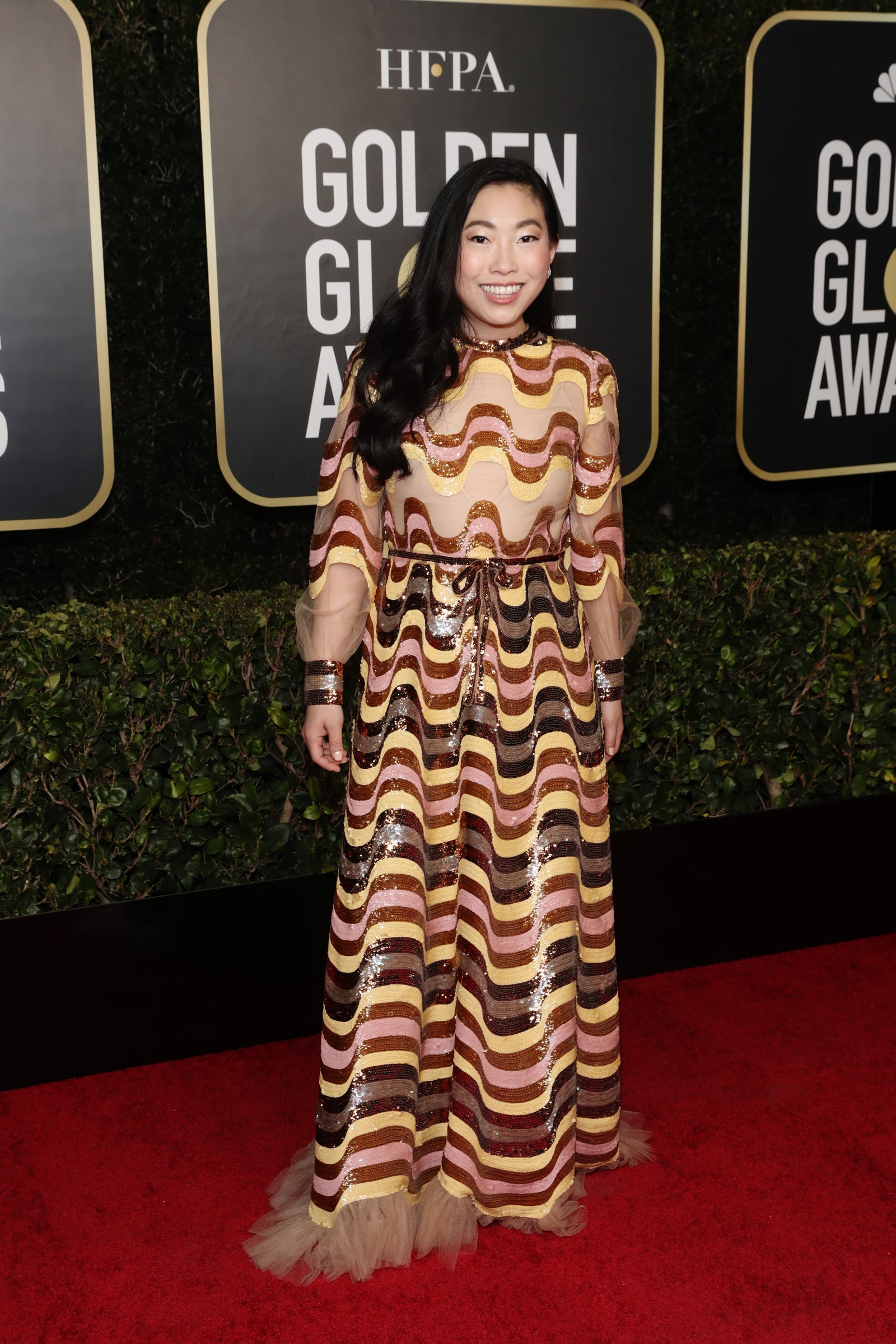 Awkwafina made history at the Globes as the first Asian-American woman to win Best Actress. This year, the actor is back to present the Globe for Best Actor (Motion Picture). The NYC-native chose a ’70s inspired maxi dress made by Gucci. 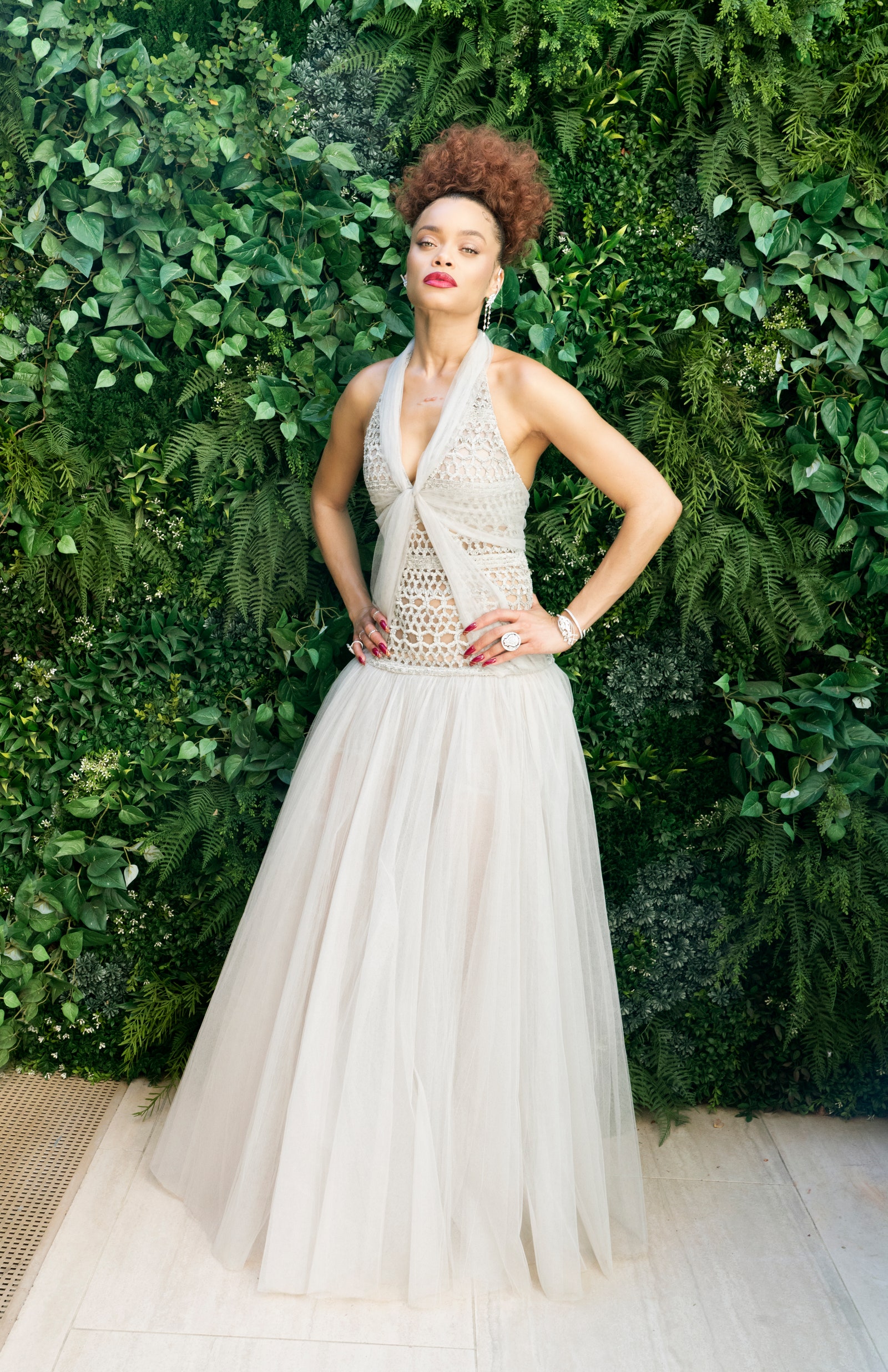 Andra Day looks ethereal in a gray Chanel gown at the Golden Globes! The actress completed her look with her hair styled in a lush updo. The actress won Best Actress in a Motion Picture (Drama) for her performance in Hulu’s “The United States vs. Billie Holiday. 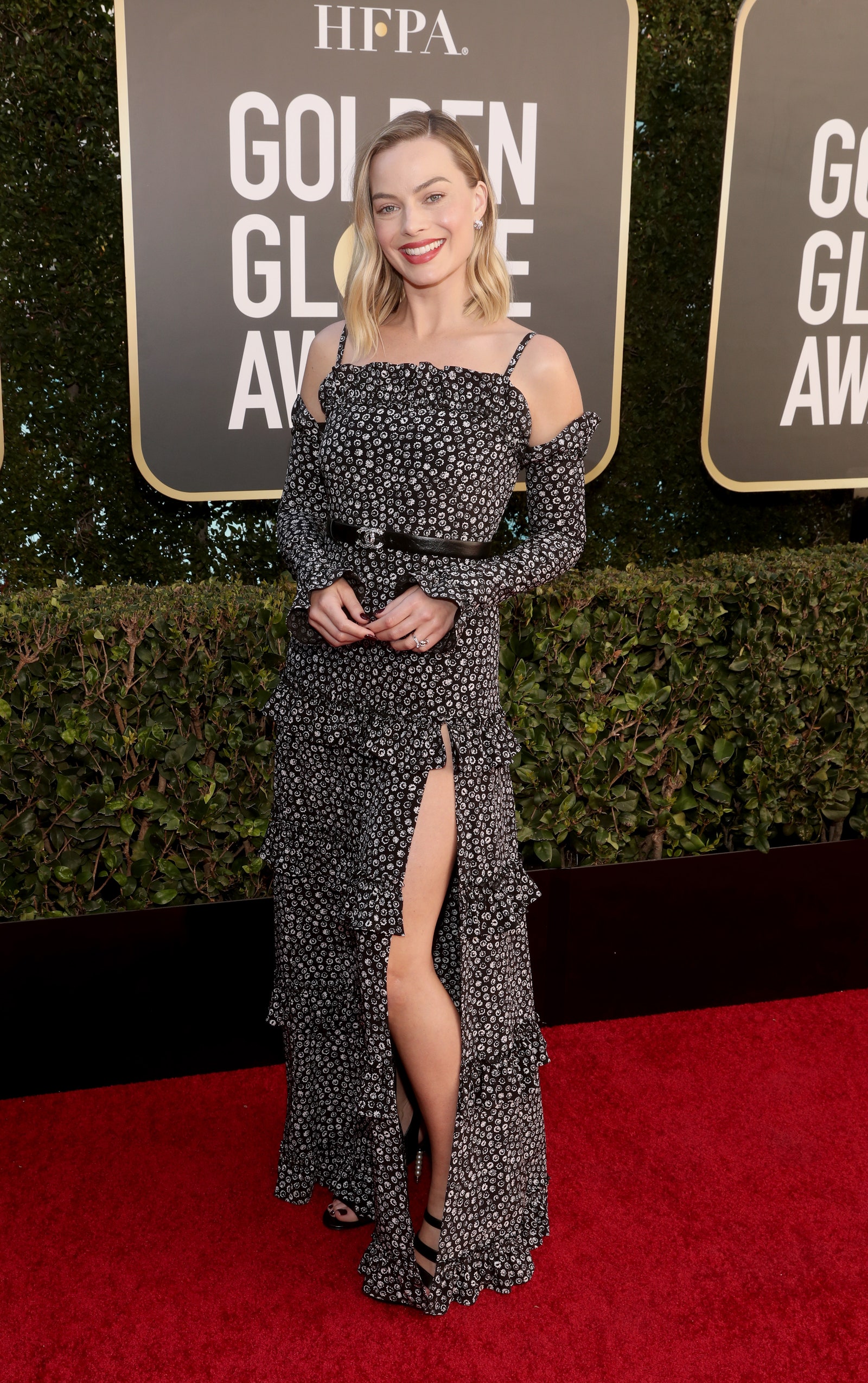 Margot Robbie brought classic, effortless glamour to the red carpet in a belted Chanel black dress with a high-leg slit and accessorized with a Chanel purse. 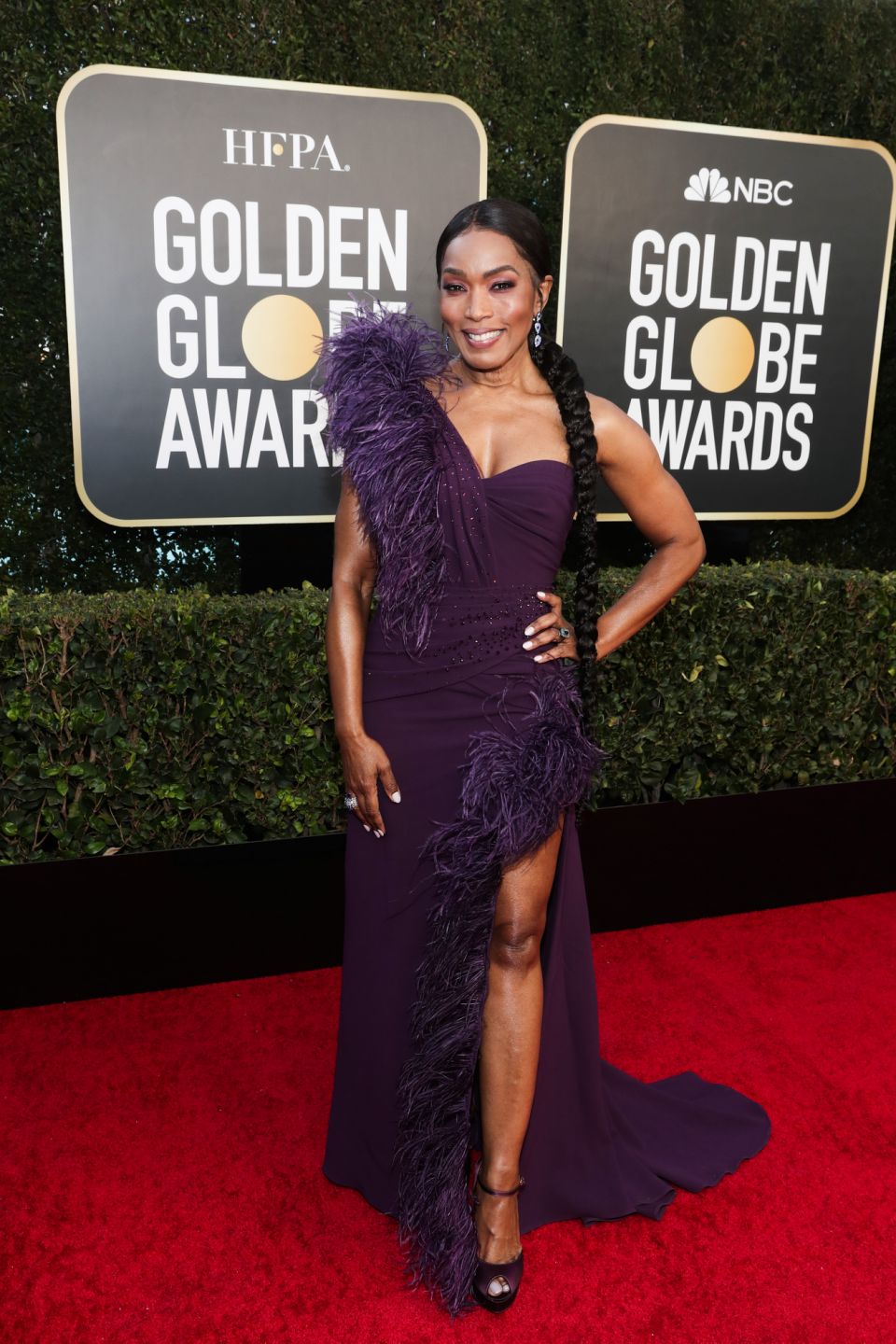 Angela Bassett arrived at the step-and-repeat in Beverly Hills in a regal purple Dolce & Gabbana gown. The draped dress features beaded embellishments and a feather trim. 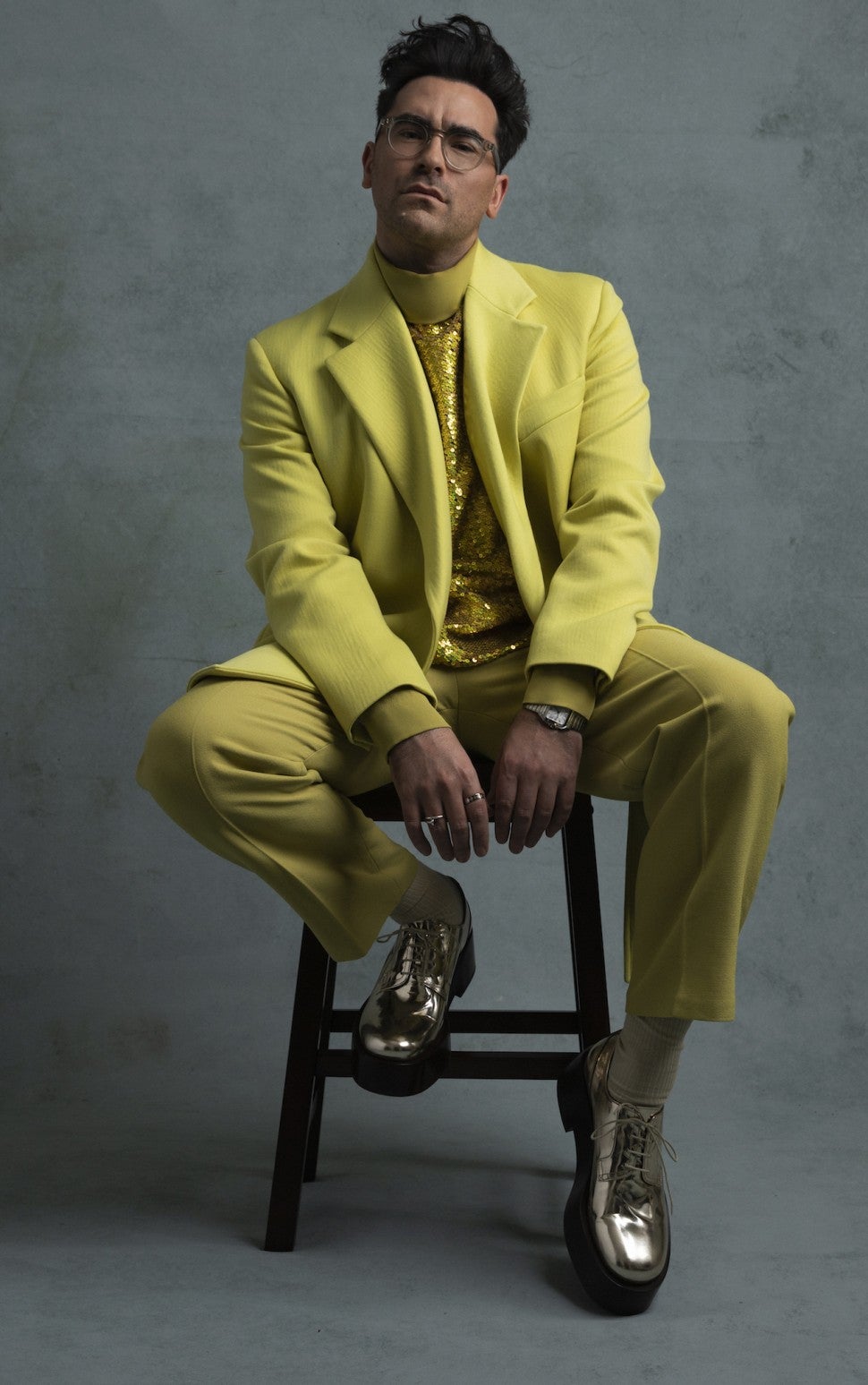 Dan Levy looks chartreuse chic in a Valentino suit, complete with a sequin turtleneck top and metallic platform shoes. The ensemble is from the brand’s new men’s haute couture collection. 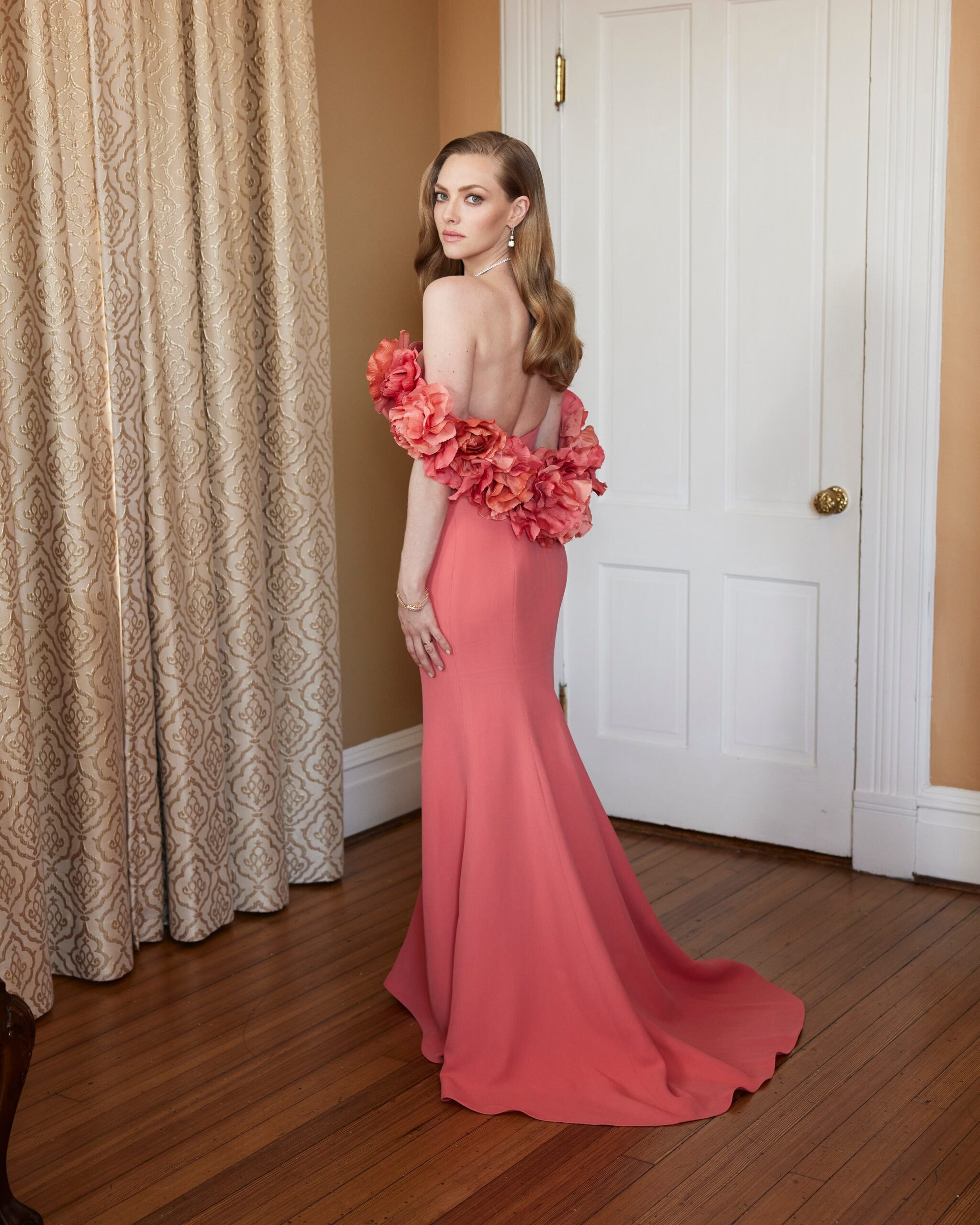 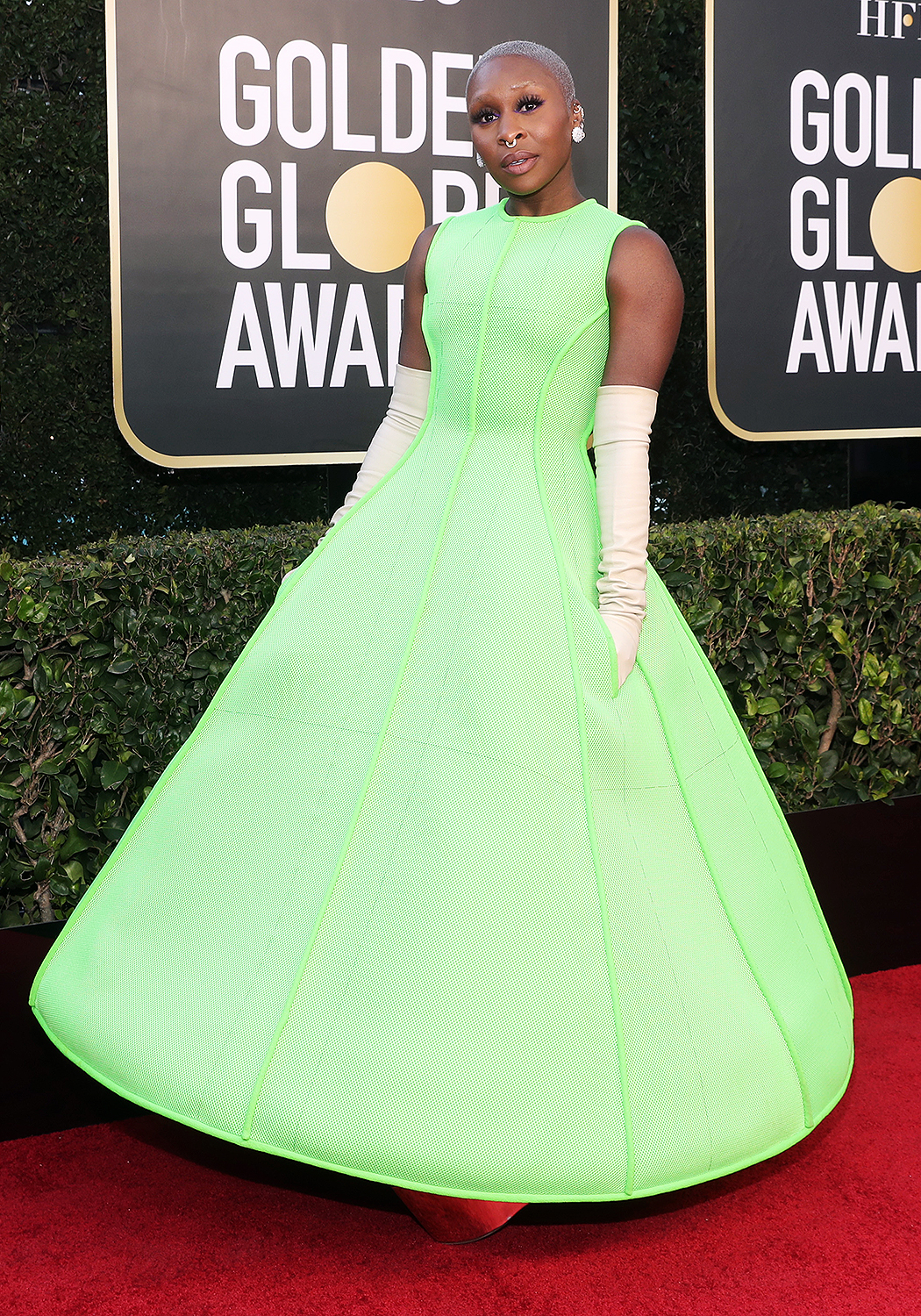 Cynthia Erivo, who presented during Sunday’s telecast, made her debut in a bright and bold neon green tea-length Valentino Haute Couture dress. She completed the look in a pair of sky-high metallic silver platforms. 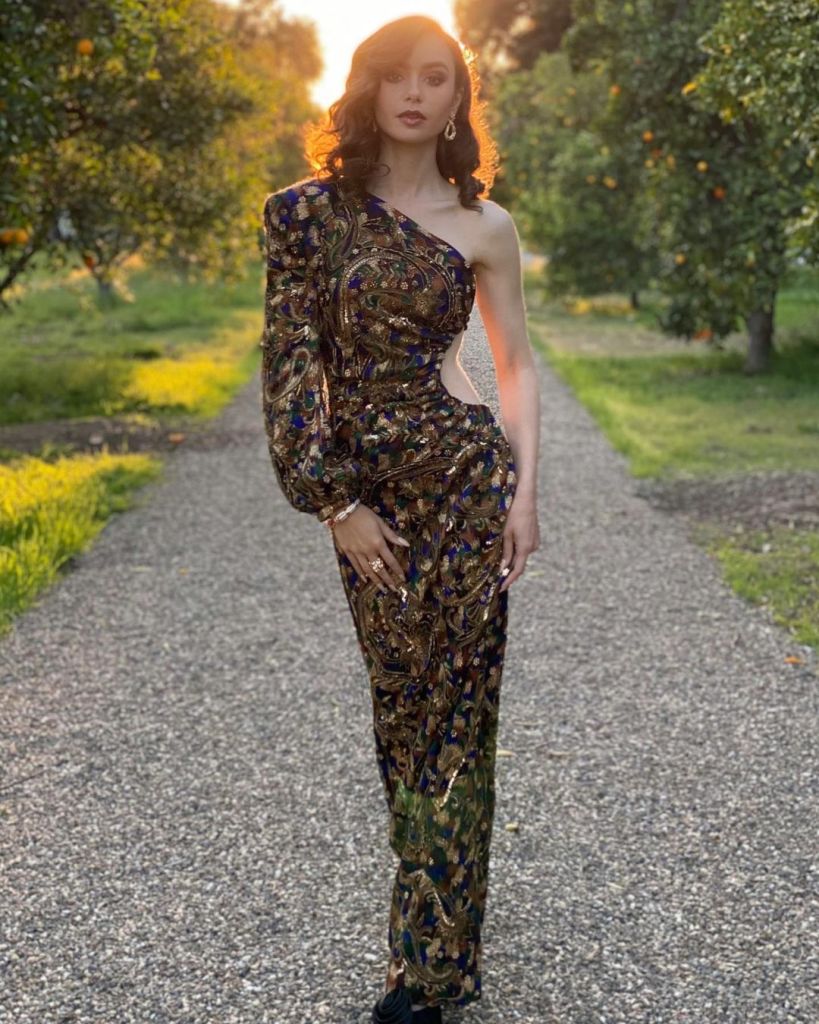 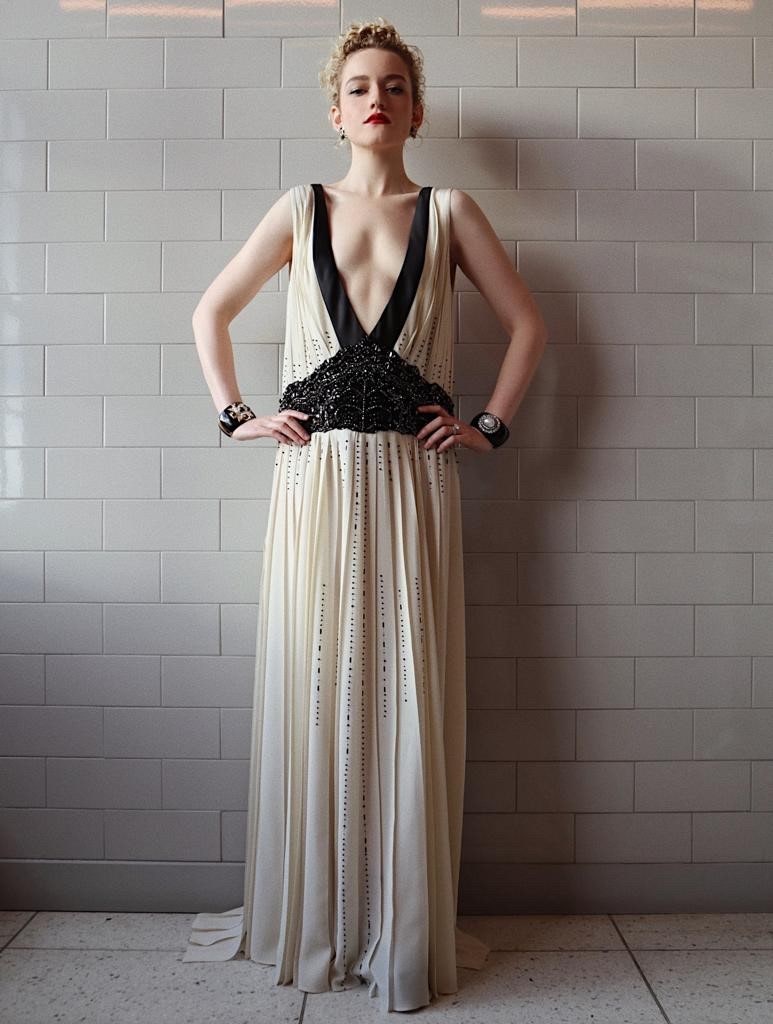 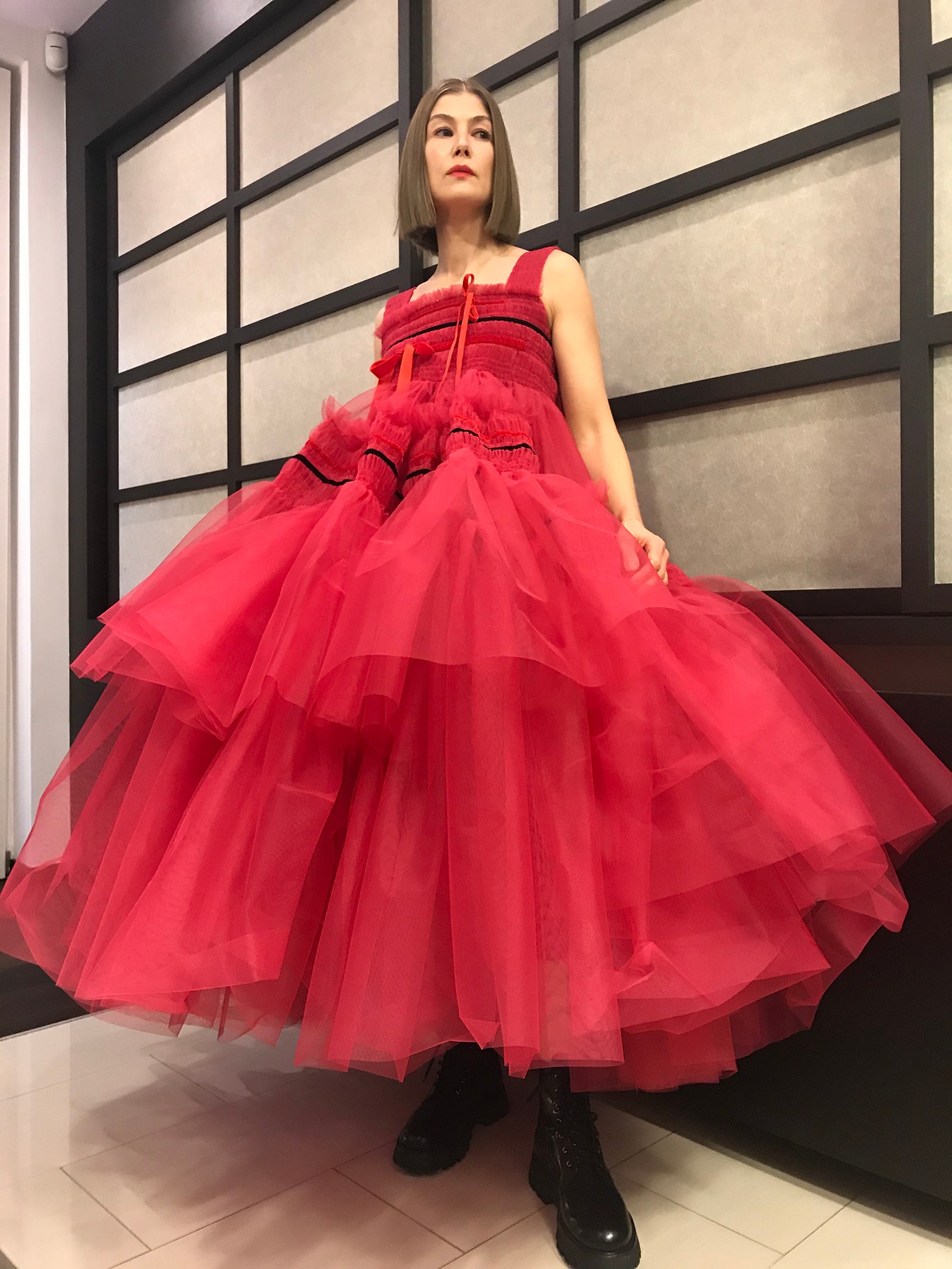 Rosamund Pike won her first Golden Globe for Best Performance by an Actress in a Motion Picture for her role in “I Care A Lot”. She wore a breathtakingly-beautiful voluminous Molly Goddard dress! 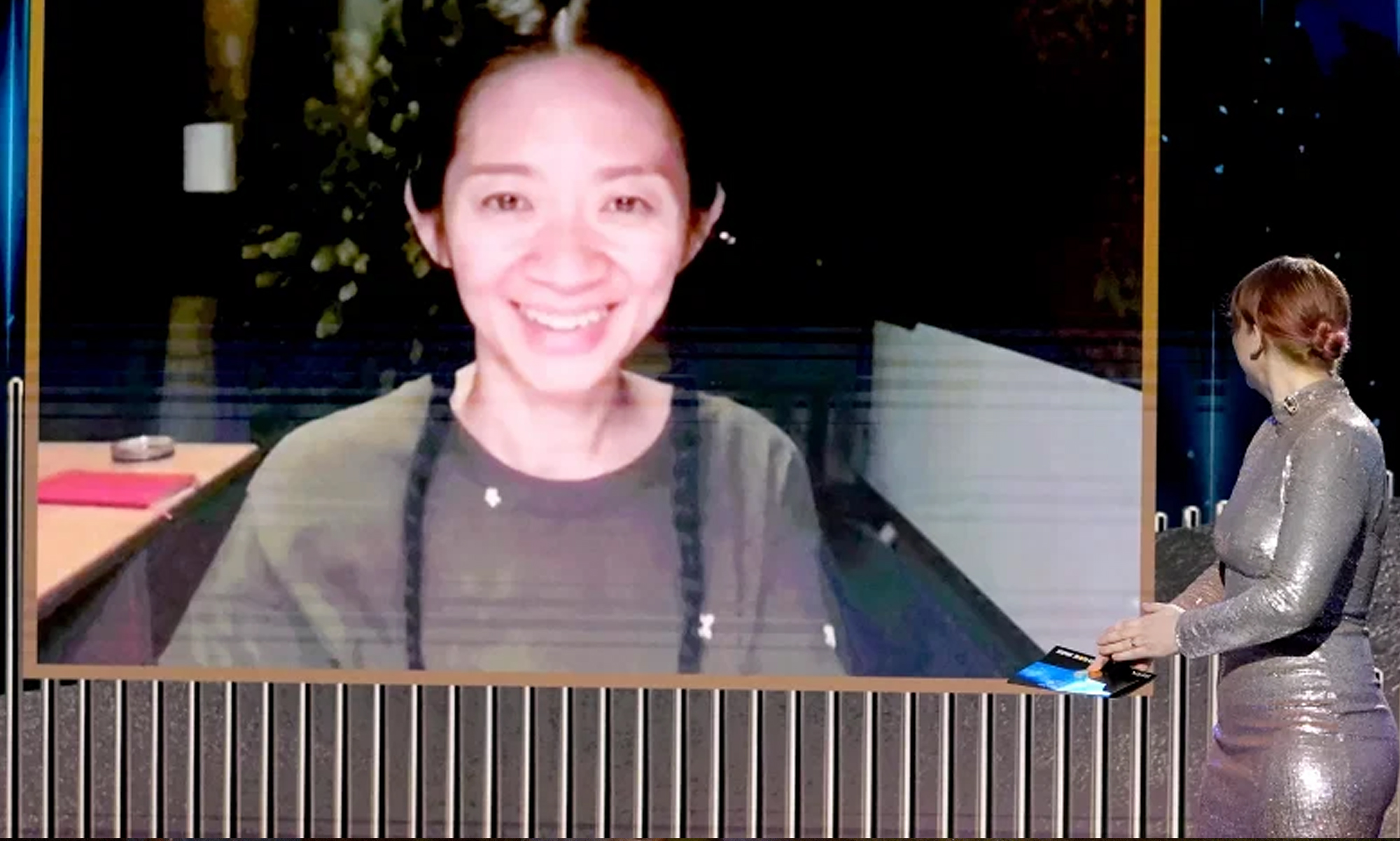 (POP NEWS EDITION) —  Chloe Zhao made Golden Globes history on Sunday night as the first woman of color and second woman ever to win Best Director.

Zhao is the first Asian woman to take home the honor, and second Asian director to win the prize in Golden Globes history, following director Ang Lee (“Brokeback Mountain” in 2006). Zhao won for her film, “Nomadland,” which also took home the biggest prize of the night – Best Motion Picture – Drama.

“I especially want to thank the nomads who shared their stories with us,” Zhao said during her speech. “I asked one of them, Bob Wells, to help me out here, and this is what he said about compassion. ‘Compassion is the breakdown of all the barriers between us. A heart-to-heart bonding. Your pain is my pain. It’s mingled and shared between us.’ This is why I fell in love with making movies and telling stories.”

The critically-acclaimed “Nomadland” follows Fern (Frances McDormand) as she travels the country in a van, making connections with wanderers from all walks of life. Zhao adapted the movie from Jessica Bruder’s nonfiction book.

Zhao’s win bridges a 37-year gap since the last time a female Best Director won at the Globes. Barbara Streisand was the first woman to take home the honor for “Yentl” in 1984. This year marks the most number of female directors nominated for Best Director at the Globes. Zhao’s fellow nominees included “One Night In Miami’s” Regina King, and “Promising Young Woman’s” Emerald Fennell.

As awards season continues, Chloé Zhao is expected to be a frontrunner at this year’s Oscars.

Like the Oscars, the Globes has sparked controversy for the lack of female Best Director nominees. Recent contenders like Greta Gerwig, Lulu Wang, Marielle Heller and more have been snubbed. The last female director to be nominated wasAva DuVernay for “Selma” in 2015.